Last week, the PrestaShop team shared some details on the new default theme that will come with PrestaShop 1.7. Let’s see how it looks like!

Here is how PrestaShop will (likely) look like in 1.7:

The first thing we can notice is that the new template looks a lot more compact than the previous. In the header, they decided to take advantage of the extra space of the navigation bar and stick the cart there as well. The top menu has been floated to the left, next to the logo, with the search bar presumably being part of it, instead of laying there as a separate module (the top horizontal menu had the option to include a search bar).

The slider is still boxed, but we all hope there will be an option to let us make it full width.

There is not much to say about the products list in the home page, since it looks to be a work in progress (we expect to see more info on hover, in any case).

The footer has been left untouched, with the only difference of the light color scheme against the previous dark one. 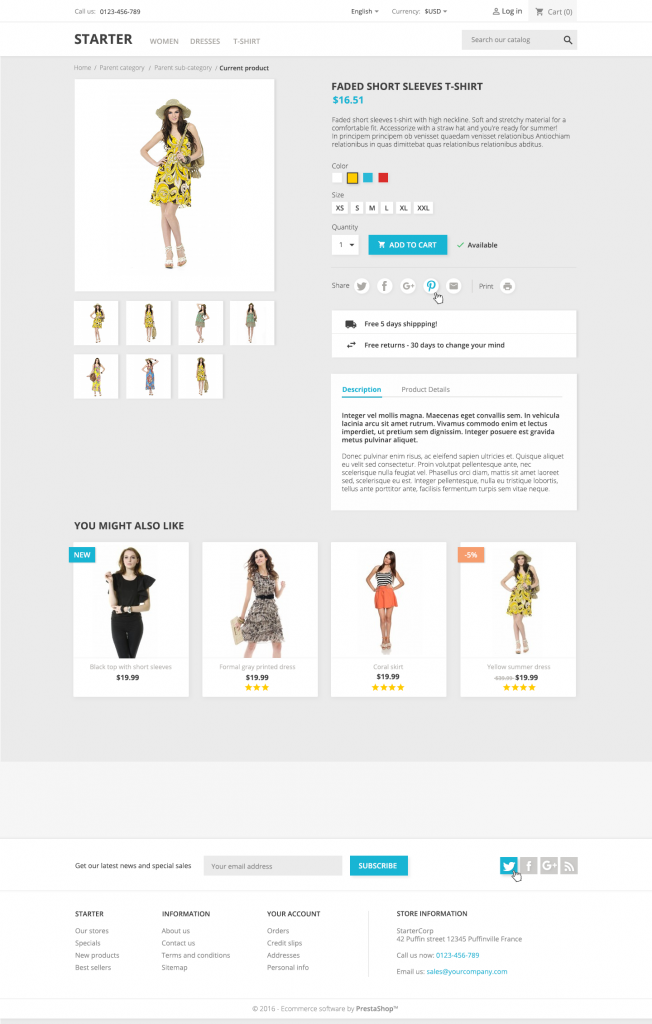 The product page has gone through a diet as well. It switched from a 3-columns to a 2-columns layout for the top part.
The choice is nice, but I find it arguable to keep the tabs on a narrow column as well. Although I can see this has been done to allow images to display without scrolling buttons, it seldom happened to me, workinng with prestashop, to see a product having more than 8 images. That said, the Free shipping info box will hopefully be configurable; nice addition.

One File to style them all

Maxime Biloé announced that PrestaShop 1.7’s theme will compile everything into a single CSS file, and that this will happen for JS as well. Although good for reducing the HTTPS lookups and improving a page’s rendering speed, there are some potential issues to consider in doing so.

The first is that, being PrestaShop a variegated software that uses third party implementations, you cannot predict if any third party code will break the page rendering. Having them split into multiple files, you would be able not only to easily troubleshoot, but the only broken one would probably not so deadly affect everything as if it were in a single file. You might be familiar with this type of errors if you ever used CCC. A broken comment in one file is enough to kill the whole page, because of compression.

Hopefully, they will opt for a wiser division in groups, to help scalability and maintainability.

Visually speaking, although I kind of like the new clean interface, the theme currently looks poor and aesthetically unappealing. PrestaShop 1.6’s template looked more professional and “full” in comparison. Being it still in development, we will hopefully see changes in this sense, as the release is still a few months ahead.

As a side not, you will notice PrestaShop’s pink is currently not in the color scheme. The Blue/gray scheme kind of makes it similar to OpenCart.

Notice this is not the Starter Theme, but actually based on it. Starter will be a skeleton that developers will use to build new PrestaShop Templates, instead of doing it from scratch

Fabio has been involved in web development and design since 2005, when launched his first website at the age of 16. He’s now highly skilled in both client and server side development, along with design, and since August 2012 runs a successful website about PrestaShop tutorials and Prestashop Modules called Nemo’s Post Scriptum, at http://nemops.com
More posts by the Fabio Porta
|
Personal Website

Copyright © 2003-2013 Arvixe, LLC. All trademarks are property of their legal owner.